The thesis at hand presents thermal models, which predict the temperature development in laser-assisted thermoplastic tape placement processes. A focus is placed on the time-dependent through-thickness temperature distribution at increased speeds. The thermal models make it possible to obtain the:

within the tape and substrate at various process speeds analytically. The predicted development of a thermal skin layer at high speeds is described quantitatively. An analysis of the known bonding mechanisms reveals that at a certain magnitude the thermal skin effect will influence the weld strength, by affecting the macroscopic draping, the intimate surface contact development and autohesion.

Experiments with a novel test setup are presented, which enable the consolidation at defined temperature gradients and defined tape speeds. The setup was used for an initial investigation on the general effect of temperature gradients at a consolidation speed of 1 m/s. Two conflicting positive effects of high gradients were observed: On the one hand, the backside of the tape stays unmolten, remaining flat and smooth, which is expected to be beneficial for subsequent laydowns and for the silicon roller. On the other hand, the high gradients inhibit the melt flow and malleability of the tape, due to a more narrow melt pool and a higher stiffness: Surface steps of 60 µm were thick enough to prevent the filling of a 2 mm-wide area at the edge of the step change, although the original tape had a thick and smooth surface polymer layer.

In order to control the thermal state within the tape – independently from the process speed – several irradiation strategies are investigated and compared on their usefulness and feasibility to be applied in tape placement systems. The most feasible strategy was found to be adaptive irradiation lengths, created e.g. by VCSEL or by electromechanical zoom homogenizers. The correlation between irradiation length, laser power, surface temperature and thermal penetration is described by use of the analytical solutions. Optimization potentials for the laser technologies are presented.

Finally, a novel optimization strategy for laser-assisted tape placement processes is derived with the goal of adjusting the melt dwell length relative to the available pressuring length of the respective consolidation roller, by changing the laser irradiation length properly. 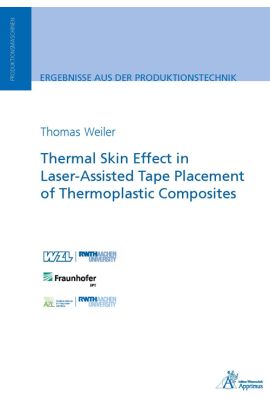