The store will not work correctly in the case when cookies are disabled.
↑
Description

The development and the whole lifecycle of robotic and general mechatronic systems features a high degree of complexity. The eRobotics approach aims at making this complexity manageable by combining the usage of electronic media, modern 3D simulation techniques and robotics concepts. The basis for any eRobotics application is a Semantic World Model – a comprehensive 3D model of the developed system and its operational environment featuring closeness to reality and a self-describing meaning. These highly complex models require an efficient data management that goes beyond the traditional flat file.

The work at hand offers a solution to this problem by presenting a new universal data management approach for eRobotics applications that efficiently manages Semantic World Models in a distributed database. The basic idea is to combine multiple instances of a simulation database (SimDB) with a common external database (ExtDB). SimDB is an active, in-memory simulation database that serves as the core data management component of a 3D simulation system. It caches the Semantic World Model and realizes its execution. ExtDB's duty is the central management and provisioning of the shared Semantic World Model, providing a persistence back-end and a versioning mechanism, and serving as a communication hub for the distributed system.

A novel database synchronization approach flexibly synchronizes each pair of SimDB and ExtDB on schema, data, semantics as well as on version level. It is based on a sound theoretical basis using methods adopted from Model-Driven Engineering. The approach is universally specified in terms of the Unified Modeling Language's (UML) metamodel making it applicable to various database paradigms while ensuring an object-oriented modeling optimally suited for Semantic World Models. 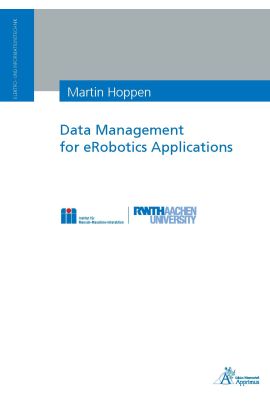 This work presents a new universal data management approach for eRobotics applications using distributed databases. The development and lifecycle of robotic systems features a high degree of complexity, made manageable by the eRobotics approach that combines electronic media, 3D simulation and robotics. The basis for any eRobotics application is a comprehensive 3D model of the system and its environment. Such highly complex models require an efficient data management provided in this thesis.