The advent of digitalization in manufacturing technologies imposes high requirements on the underlying sensor technology and signal processing methods. Measurement errors directly find their expression in the quality of the results from data-driven modeling. In addition, erroneous measurements may lead to severe complications in monitoring and control applications.
Against this background, the focus of this thesis is the development and evaluation of methodologies for the correction of systematic errors in cutting force measurements. The research framework is constituted the milling processes, which is characterized by a time variant cutting force. The examined measurement principle piezoelectricity, which is commonly used in cutting technology research.
The considered systematic measurement errors originate from the seismic mass representing the entire mass located upon the piezoelectric transducer. By this means, the usable bandwidth of the measurement system is limited. Cutting force measurements will be systematically distorted when the spectral content of the cutting force exceeds the usable bandwidth. In addition, inertial forces systematically super-impose a cutting force measurement and the distribution of the gravitational force with regard to the measurement axes changes when the seismic mass is subjected to motion.
To be in control of the process of measuring cutting force, the requirements towards the sensor system were examined from a construction and machining process perspective first, and a methodology for milling processes was introduced to estimate the required bandwidth. In a second step, the systematic errors were modeled. For the transmission behavior of the measuring system, an oscillator model was introduced and a corresponding system identification procedure was provided. Superimposing inertial forces were modeled by the means of Newtonian mechanics. The oscillator model was consequently integrated in a Kalman Filter for the correction of the transmission behavior of the sensor system. In this context, a parameter study was conducted to find an optimal parameterization of the Kalman Filter. Moreover, the kinematics used for the correction of inertial forces was introduced. Finally, the presented correction methods were implemented on an embedded device, incorporating a field programmable gate that enabled the correction of the systematic errors in hard real-time. 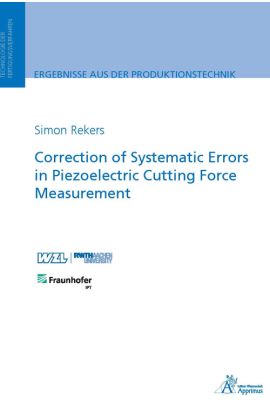